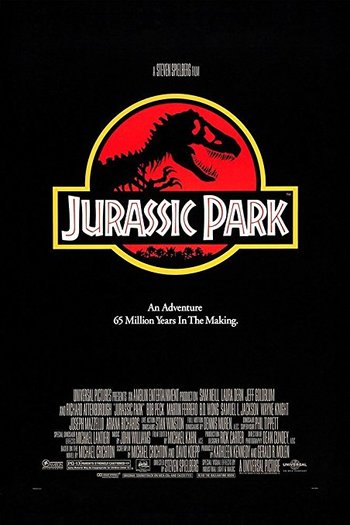 Jurassic Park is a 1993 science fiction film directed by Steven Spielberg and the first of its eponymous film franchise, based on the novel of the same name by Michael Crichton, who was also brought on to pen the screenplay for the film.

Scientists funded by billionaire John Hammond (Richard Attenborough) have discovered how to bring extinct animals back to life via a complex cloning process. To make a profit off of this technology, Hammond and his company, InGen, decide to build a theme park featuring living dinosaurs. This in itself would not be such a bad idea — except the organizers are rushing to get it open, have built it on a remote island, and have almost no security personnel, deciding instead to automate the whole thing with unreliable computers — even refusing to tell the software designer what the system is for.

Beyond being Spielberg's biggest hit since his late 1970s-early 1980s run, the movie was a landmark in cinematic special effects technology. The extremely convincing animatronic dinosaurs created for the film were combined and enhanced with groundbreaking, realistic CGI ones. The results were so spectacular that it rendered virtually all Practical Effects like puppetry and stop motion obsolete overnight, to the point that it's impossible to find any wide-release feature film today which doesn't use digital effects. Meanwhile, in spite of the requisite Hollywood mistakes, many paleontologists and dinosaur fanatics also loved it. The moment where the visitors first come across a dinosaur in full view and are just blown away ("...it's a dinosaur!") could be the 1990s equivalent to the Star Destroyer flying overhead from Star Wars: A New Hope.

Perhaps the most enduringly popular blockbuster film of its decade (it even celebrated its 20th anniversary in 2013 with a theatrical re-release that upgraded it into a 3-D Movie), it spawned a franchise that includes several film sequels: The Lost World: Jurassic Park (1997), Jurassic Park III (2001), Jurassic World (2015), Jurassic World: Fallen Kingdom (2018), and the upcoming Jurassic World: Dominion (2022). It also won all three of its Oscar nominations; Best Sound Editing, Best Sound Mixing, and Best Visual Effects.

Character tropes (including dinosaurs) go on to the Characters Sheet.

The article you are reading is proofread by Richard Kiley (we spared no expense)!:

Jurassic Park has Mr. DNA, an anthropomorphic strand of DNA who explains to the audience just how they were able to clone the dinosaurs from their DNA.

Jurassic Park has Mr. DNA, an anthropomorphic strand of DNA who explains to the audience just how they were able to clone the dinosaurs from their DNA.