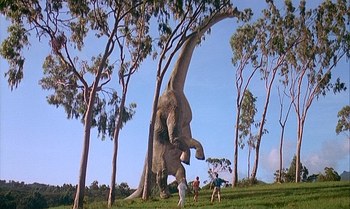 "It's... it's a dinosaur!"
To put it simply, Jurassic Park is THE franchise that embodies Everything's Better with Dinosaurs. There's no denying that the science fiction concept of resurrecting dinosaurs in our world through genetics, no matter how implausible it is, has tremendous cinematic appeal.
Advertisement: