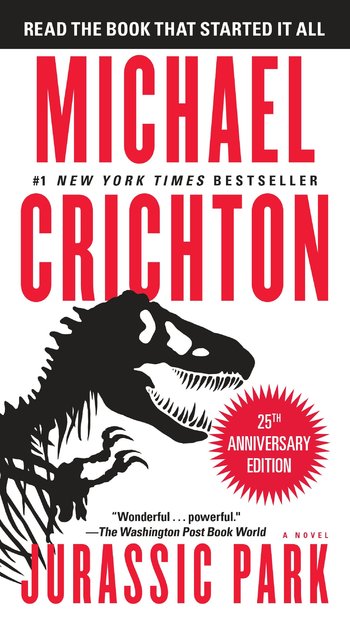 “The history of evolution is that life escapes all barriers. Life breaks free. Life expands to new territories. Painfully, perhaps even dangerously. But life finds a way.” - Ian Malcolm
Advertisement:

The book that started the Jurassic Park franchise. Written by Michael Crichton, it was first published in 1990.

Scientists discover the ability to bring extinct animals back to life via a complex cloning process. To make a profit off this technology, the InGen company decides to build a theme park featuring living dinosaurs on an island off Costa Rica.

This in itself would not be such a bad idea, except the organizers rush to get it open, cut corners everywhere to save money, build it on a remote island, and have almost no security personnel, deciding to automate the whole thing with unreliable computers — even refusing to tell the software designer what the system is for.

Naturally, everything that can go wrong does go wrong.

Received a massively successful film adaptation in 1993, which led to the writing of a sequel novel, The Lost World. Numerous unused elements of the original novel would continue to be incorporated into the film's sequels.