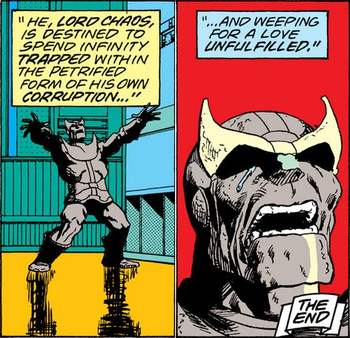 "Nature has a way sometimes of reminding Man of just how small he is. She occasionally throws up terrible offsprings of our pride and carelessness to remind us of how puny we really are in the face of a tornado, an earthquake, or a Godzilla. The reckless ambitions of Man are often dwarfed by their dangerous consequences. For now, Godzilla — that strangely innocent and tragic monster — has gone to earth. Whether he returns or not, or is never again seen by human eyes, the things he has taught us remain..."
— Steve Martin, The Return of Godzilla

So, there's a villain. Right. Murdering, world-conquering type. The series is ending, so it's time to get rid of him. Slowly and painfully. So he goes out with... a final touching quote and a One-Woman Wail?

As odd as it may seem, if you want the audience to feel sorry for a villain, a good death scene is probably the way to go. This works best if you know their Freudian Excuse; Chaotic Stupid need not apply for this sort of thing. Also works easier if this is a supporting villain. This is easiest to do with a Big Bad's minions: we can identify with The Dragon, and especially the Quirky Miniboss Squad, over time and may be sad to see them go. If a Fallen Hero dies, expect everyone to weep openly. A few well-chosen Last Words may also be used to create this feeling.

Note that if you want the audience to take the scene seriously then you have to add some humanizing elements to your villain beforehand. See Likable Villain for ways in which this can be done. Neglecting to do this may result in Narm or just confuse the audience.

A Woobie, Destroyer of Worlds and other kinds of Tragic Villain are the best choices, but any case of a genuinely well-done Anti-Villain will do. Also note that this is primarily about the story showing how sad a villain's life was, not how some of the audience will interpret it.

Compare Draco in Leather Pants, Cry for the Devil, What a Senseless Waste of Human Life, Antagonist in Mourning, and Death Equals Redemption. Do not confuse with Alas, Poor Scrappy (though it can overlap), and share the Super-Trope of Dying Moment of Awesome. Or Alas, Poor Yorick for that matter. Contrast Asshole Victim villains, who are so deplorable that their death elicits no sympathy — although some clever writers have found ways to overlap the two.

Sympathy for a deceased Complete Monster is extremely rare, as said villains are completely unsympathetic and aren't meant to be mourned in any capacity. In the few instances where the hero and/or audience do sympathize with a CM after death, it's for the most part to establish how heroic the protagonist is.