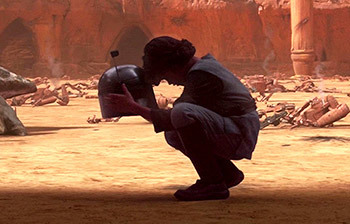 Alas, poor Jango Fett.
"Alas, poor Yorick! I knew him, Horatio: a fellow of infinite jest, of most excellent fancy: he hath borne me on his back a thousand times; and now, how abhorred in my imagination it is! my gorge rims at it. Here hung those lips that I have kissed I know not how oft. Where be your gibes now? your gambols? your songs? your flashes of merriment, that were wont to set the table on a roar? Not one now, to mock your own grinning? quite chap-fallen? Now get you to my lady's chamber, and tell her, let her paint an inch thick, to this favour she must come; make her laugh at that."
— Hamlet, Hamlet
Advertisement:

One part squick, one part Tear Jerker, Alas, Poor Yorick takes place when a character picks up the severed head of a loved one and cradles it close to them. Depending on how gross you want to get, blood is optional, and sometimes just a skull or helmet is sufficient to get the point across.

This trope is very often used to conjure up pity for the holder and perhaps suggest that they're more than a little off their rocker. Expect angst to follow. In animated adaptations of manga in particular, this part is often left out, presumably because it's too graphic for broadcast.

Distinct from A Love to Dismember in that the person does not actually have a long term relationship with the part.

Subtrope of Shout Out: To Shakespeare, and tends to be confused with the slightly more known "to be or not to be". If the character starts talking to the skull, it can be a Surrogate Soliloquy.

Contrast Decapitation Presentation. Not to be confused with Alas, Poor Villain or Alas, Poor Scrappy, although they could overlap.

The line is often misquoted as "I knew him well" rather than "I knew him, Horatio." (Although it does sum up the rest of the monologue nicely).