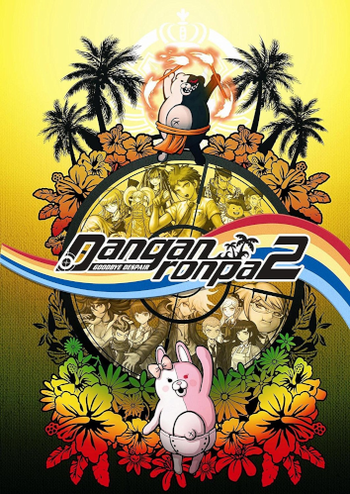 Much like its predecessor, the game begins with a new student starting their first day at Hope's Peak Academy, an elite private school that only accepts the best of the best of the best, no matter how eclectic their field. Hajime Hinata, the new guy, has always admired the school and is eagerly looking forward to attending... that is, until he arrives at the school for his first day and suddenly falls unconscious.

When he wakes up, Hajime finds himself trapped in a classroom with fifteen other new "Ultimate" students. They are greeted by a strange rabbit-like doll called "Usami", who promptly announces that they'll be going on a field trip. With a wave of her wand, the walls to the classroom fall apart to reveal that they have all been stranded on the tropical resort island of Jabberwock. Under Usami's instructions, the students must bond with each other to gain the "Hope Fragments" needed to leave the island.

All of this is sadly for naught when Monokuma suddenly shows up and violently usurps control of the island from Usami. He then reinstates the same "School Life of Mutual Killing" rules from the first game, meaning that the only way off the island is for one of the students to commit a perfect murder and sacrifice the other students so that they alone can leave. While the flow of the game remains largely unchanged, the dynamics of certain minigames have been drastically changed and new ones have been added to the mix as well: for example, some segments of Nonstop Debate task you with finding the right statement to agree with, and other classmates can now interrupt you with an objection, leading to a Rebuttal Showdown where you literally cut through their arguments until you finish them with a "Truth Blade".

After completing the game, an alternate story called Island Mode is unlocked where Usami strikes first against Monokuma when he appears and manages to beat him as a result, preventing him from taking over. The field trip goes exactly as planned, giving you plenty of time to bond with your fellow classmates in peace.

A localized version was released on September 2nd, 2014 for the PlayStation Vita. This version was later ported to PC via Steam in April 2016. It was also released worldwide bundled with the first game as Danganronpa 1・2 Reload for the PlayStation 4 in 2017. It was then brought to the Nintendo Switch in 2021 alongside the first and third games and Danganronpa S: Ultimate Summer Camp, either in the physical bundle Danganronpa Decadence or separately in the eShop.