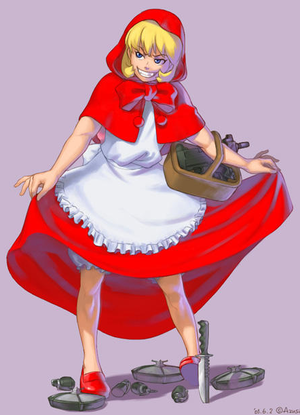 While The Cutie is known for being a character that is sweet, lovable, and innocent, some characters, while apparently cute, aren't as innocent as they seem.

The Fake Cutie is either a full-grown woman or otherwise mature person, but insists on dressing, speaking, and acting like a child, or at least much younger than she is in order to be cute and "get dates" or other benefits.

This cutie act is actually camouflage to hide her intelligence, her true self, her nefarious intentions, or her insane jealousy. Sometimes she knows full well how shaken up her behavior makes her foes, and takes great joy in seeing them squirm. She tends to be very manipulative and is often murderously dangerous to those that see Beneath the Mask. For children, may involve levels of Troubling Unchildlike Behavior. However, it is entirely possible that she may have less malicious intentions.

She is the cute counterpart of the Stepford Smiler, and may even be her daughter. The Bitch in Sheep's Clothing is her meaner sister. The fully grown Fake Cutie is invariably a Psychopathic (Wo)man Child unless she is of the Broken Bird variant.

While this trope is almost Always Female, examples using little boys or adult Keets are not unheard of.

Tanya abuses her age to make the obligatory warning sound like a prank.

Tanya abuses her age to make the obligatory warning sound like a prank.