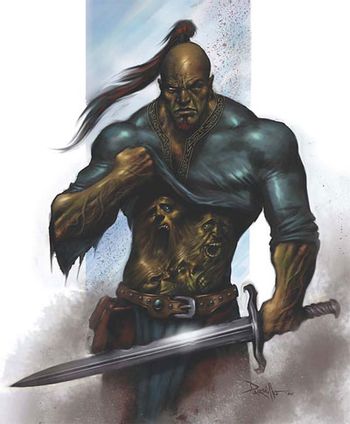 Binding a spirit of many faces to yourself may have side effects.
Advertisement:

A type of Host that "willingly" allows him/herself to be possessed by someone or something. In Real Life, this is usually someone who performs a Spirit Medium role, like that of a shaman (it's known as voluntary possession)note More details here.

. The trope has been used more commonly in fantasy settings in conjunction with Demonic Possession from an evil spirit or magician specialized in Black Magic. When a Willing Channeler is possessed by such an entity, they become a Living Bodysuit. The opposite form of spirit however, being possessed by a benevolent force, is simply called Channeling, as it is more or less a mutualist Symbiotic relationship of a spiritual nature, and rarely does the "virtuous guest" force anything upon the host without consent and/or necessity.

Usually a Willing Channeler must perform a ritual of some sort to conjure the target spirit (s)he wants to be possessed by, but this is not the golden rule, just the norm (for the genre of fantasy at least). Also, even if the spirit does not possess the conjurer, the character is still considered a Willing Channeler for having committed to the desire to be possessed, even if the desire is not natural but actually an artificial compulsion (e.g. enchantment, drug usage, Mind Control, etc, etc). This possession may be visually represented with Transformation of the Possessed, Prophet Eyes or other cues; if the possessing force is powerful and/or evil, there may be a mild case of Possession Burnout afterwards.

Note: A Willing Channeler is NOT the possessing entity, it is the host. Truth in Television as this is what Spiritualist Mediums as well as Shamans

invite and encourage. It is one of the basics of Vaudon

and other similar African diasporan traditions

. In traditional Balinese society, the hosts are little girls

who in a ceremony called sanghyang dedari are possessed by angels

to restore villages after sickness or drought.note As Balinese farmers reinstate ancient sustainable rice farming methods, they revive this ceremony to bless the fields

. Some mediums' reported voluntary possession relationships have been known to last for decades, usually in co-operative arrangements, like a Split-Personality Team.

See also Heroic Host. Compare Symbiotic Possession, where the possession is initially forced, but afterwards (either immediately or gradually) becomes a mutually beneficial relationship. Might overlap with Monster and the Maiden, if the channeler is a woman and the entity is male.