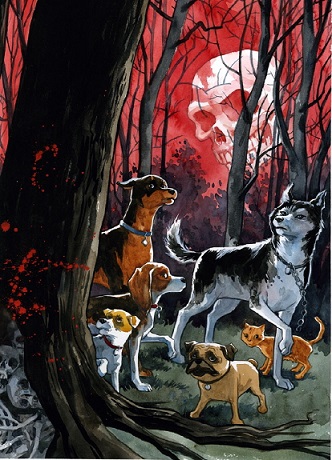 "Something is wrong in Burden Hill. Some unknown entity is at work here, attracting other malevolent forces to this territory. This evil needs to be tracked down and destroyed. The Society is not what it once was, in numbers or in strength. We need your help to save Burden Hill. Can we depend on you?"
— Emrys, "The Gathering Storm"
Advertisement:

A supernatural horror/adventure comic series from Dark Horse Comics. It follows the residents of Burden Hill, a picturesque small town that seems to attract plenty of paranormal activity. Luckily there is a society whose sole duty is to defend against these various evil forces, with the only catch being that this society is made up of dogs (and one cat).

, it expanded into a series of limited runs and one-shots, and is collected in omnibuses. Written by Evan Dorkin with art by Jill Thompson (and later Benjamin Dewey), the pacing, art, and script are all top-notch, and it soon became a popular (if low-profile) new property.

In 2013, it was announced that Shane Acker would be doing a CGI-animated film based on the property.

Shortly after that, they run into Digger, whose face fur has turned from black to white with shock.
Whitey: So weird. And Pugs was just saying animals can't change—
Pugsley: Would you shut up? I was talkin' 'bout that no-good witch cat!