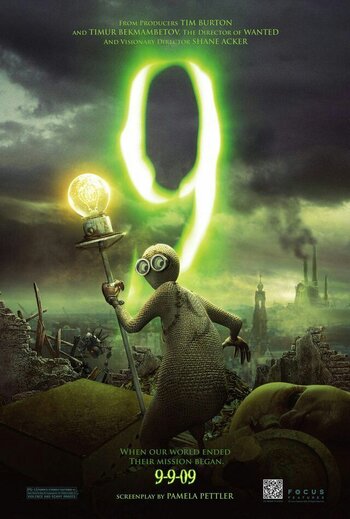 The title 9 refers to two computer-animated movies, both directed by Shane Acker:

The main characters are tiny, sentient, animate constructs designed after sackdolls, or ragdolls depending on who you ask, though two of them are made from garden gloves. The creator, Shane Acker, has officially dubbed them "stitchpunks". This has generally become the term for them in fandom.

In both cases, the plot largely follows one such stitchpunk, simply known by the number 9 painted onto his back, as he attempts to survive in an Alternate Universe where all life on Earth has been wiped out.

The short was released first, and chronicles 9's attempts to defeat an unnamed mechanical creature, who destroyed 5, his one-eyed mentor, and the other robots, and retrieve the machine's soul-stealing device. The film, while ambiguous about the setting, was praised for its storyline and plot.

The movie expands on the short considerably; 9 awakens alone in a burned-out house in the ruins of a city, with no clue to his origins except a mysterious talisman. He begins to explore the wasteland and quickly encounters both the Cat-Beast and his own numbered compatriots (each of whom is more fully fleshed out as a character). Soon, they are drawn into an exploration of both humanity's destruction and their ultimate purpose as a terrible enemy hunts them down to consume their souls.

Not to be confused with the musical adaptation of 8½, Nine (Musical), or of District 9.

Example of:
Negated Moment of Awesome