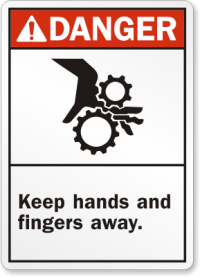 They have these signs for a reason, just so you know.
"Now I'm gonna ask you ten times, Shelly, ten times..."
— Micky Malnato, Bound
Advertisement:

Eyes, teeth, tongues, throats, feet and genitalia are not the only human body parts that are extremely sensitive and fragile. Our fingers are, too. As one of our primary means of negotiating the world other than our eyes, our fingers have an abundance of nerves, making them especially vulnerable to pain. This trope includes all the nasty things that can happen to them:

What makes fingers so attractive for horror writers is that unlike the eyes, we generally have ten of them. The fun lasts five times longer! And that's not counting the toes.

Also, most people can relate to finger and toe injuries, since they tend to be very common in everyday life. This makes finger severing and other injuries a lot more cringe-inducing than something as over the top as limb dismemberment or decapitation. Most people have no idea how something like that would feel, but we pretty much all can imagine what a having a section of your finger cut off would feel like, and it seems very unpleasant.

There's also the fact that in humans, fingers have the highest number of touch receptors of any part of the body, primarily as an evolutionary consequence to the human species' tool biased survival strategy that required the use of the hands. As a result, fingers are so sensitive they could even be considered to be sensory organs on par with the eyes. The loss of hands can also be extremely disabling for the same reasons above, just as the loss of an eye can be.

The same thing can also happen to the toes. This is nastier than people may assume, as losing even minor toes can cause serious damage to people's ability to walk and balance.

See Mutilation Interrogation for Cold-Blooded Torture that often involves this. For this done as a ritual, see Yubitsume; for a game that may result in this, see Five-Finger Fillet. Fingers are a fairly common Creepy Souvenir. Compare An Arm and a Leg, where an entire limb is lost; and Impaled Palm, where the handpalm is pierced by some object. Contrast, among other things, Intertwined Fingers.