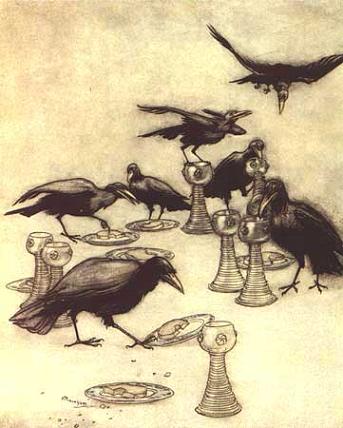 Hey, someone's showed up at our glass mountain and eaten our food!
Advertisement:

The Seven Ravens is a German Fairy Tale collected by The Brothers Grimm.

A family with seven sons, desperate for a daughter, finally gets their wish. But she is sickly, so her father—worried for her soul—sends her brothers to fetch water from a well for baptism. They, in their eagerness to obey, drop the jug in the well. After some time passes, the father believes they are playing, so he cries out that he "wants all of the boys to become ravens." Unbeknownst to him, they really do turn into ravens and fly into the sky.

The girl eventually gets better. She grows up not knowing that she had brothers, but eventually she overhears people gossiping about them. She goes out to find them, taking with her one of her parents' rings. She meets the Sun, which frightens her off, and the Moon, which also scares her off. But then she meets the stars, which are kindly. The Northstar gives her a small bone, which she will need, and tells her that her brothers live in a glass mountain.

She finds the glass mountain, and has lost the bone. The door to the mountain is locked, so she cuts off her finger and uses it to unlock the door. She meets a dwarf, who informs her that the ravens will soon return. While she waits, she finds a dinner table set up for the ravens and eats a bit off of all the plates. Her parents' ring falls into the last flask that she drinks from. Her brothers fly back, examine the mess she made, and fiddle with the flasks. The ring falls out of the flask and the ravens recognize it. One of the ravens prays to God that, if their sister was there in the mountain, they would be saved from their curse. Hearing this, and since their sister was indeed there, the ravens are freed from their curse.