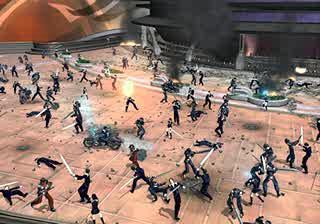 Yeah, this? This is just what's happening in the quad.
"Far from shore, a Pacific War
bombs are falling from the skies
It's a bomb-run day, it's the Naval Way,
A blood-red sun is on the rise!"
— Sabaton, "Midway"

A Big Badass Battle Sequence isn't just a battle, it's war. This is the battle that makes other battles look like schoolyard scuffles. Expect a high death toll, either shown or implied. The best examples of this trope show not only the battle itself, but the preparations for it and the aftermath. Don't expect it to be pretty.

Bonus points if coupled with Orchestral Bombing. May be the work's Moment of Awesome as opposed to a single character's. Shell-Shock Silence may be added for dramatic effect.

Note that this trope implies that there are at least two armies fighting each other, and as such One-Man Army examples do not fit here.

Can overlap with Parallel Conflict Sequence, if multiple such sequences are part of one full-scale battle.

Horus begins his bloody crusade against the Emperor of Mankind that will set the galaxy on fire and stain the stars with blood for millennia to come.

Horus begins his bloody crusade against the Emperor of Mankind that will set the galaxy on fire and stain the stars with blood for millennia to come.