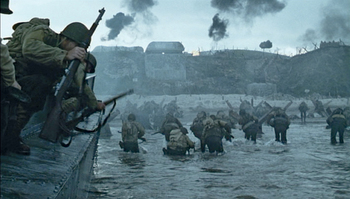 "Keep the sand out of those weapons! Keep those actions clear! I'll see you on the beach!"

So you've got your troops and you're ready to take the fight to the enemy. The men are pumped, the tanks are fueled, and it's time to win this war.

There's a problem, though. The enemy is sitting on the other side of a sizable body of water. It may be a large river, a lake, or even an entire ocean. The bottom line is that you can only get to where you need to be if you deal with the water hazard first.

So what's the next move? An amphibious assault, of course! Load your boys up on boats, hovercraft, water-tight armored trucks, or whatever sea-worthy transportation you've got lying around and send them to storm the beaches.

The iconic Real Life examples of this trope made famous during a little dust-up known as World War II secured the image of an army invading an enemy-held shore in the public consciousness and inspired the use of amphibious attacks in all kinds of military- and war-related works. But this kind of warfare is of course much older than that. Ever since humans learned how to build boats, they've been using them to get the drop on their enemies — just ask those Horny Vikings. (Nowadays, with the ability in modern warfare to project force inland with armored attack helicopters, the whole concept of storming the beaches is somewhat obsolete.)

How well this tactic works varies wildly. If the enemy does not expect an attack from the water, the invaders will have an amazing advantage. However, in most cases you can look forward to a protracted battle for the beach! The goal is to get boots on the ground, establish a beachhead, and then bring in as many reinforcements as possible as fast as possible in order to advance into enemy territory.

For times when the invading force decides to go by air instead, see It's Raining Men.

The briefing for the 3rd mission in ''Medal of Honor: Allied Assault'', which shows the Normandy beaches. Of particular focus is Omaha Beach, where Lt. Powell and the rest of his Ranger unit are tasked with clearing.

The briefing for the 3rd mission in ''Medal of Honor: Allied Assault'', which shows the Normandy beaches. Of particular focus is Omaha Beach, where Lt. Powell and the rest of his Ranger unit are tasked with clearing.