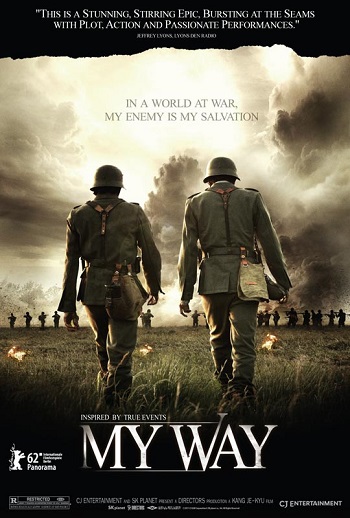 My Way (Korean: 마이 웨이) is a 2011 South Korean war film inspired by the story of Yang Kyoungjong

The movie is about two marathon runners, Jun-shik Kim (a Korean, played by Jang Dong-gun) and Tatsuo Hasegawa (a Japanese), who are fierce racing competitors from childhood. Years later during a marathon where Jun-shik wins, a riot breaks out when the Japanese judge declares Tatsuo the winner, wrongly disqualifying Jun-shik for cheating. Afterward, the riot instigators, including Jun-shik, are conscripted into the Japanese Army, where he is stationed at Nomonhan under command of the now Colonel Tatsuo. Jun-shik fights alongside Tatsuo during the Khalkin Gol campaign against the Russians in 1937. Both are captured by the Soviet Red Army and are sent to a hellish gulag. With the Soviet Union reeling under the weight of the German invasion in 1941, they are drafted at gunpoint to fight in the Battle of Hedosk. Tatsuo and Jun-shik survive and are then captured by the Wehrmacht, who in turn conscript them as Osttruppen. The film climaxes with D-Day as the Americans invade Normandy where Jun-shik and Tatsuo are stationed.