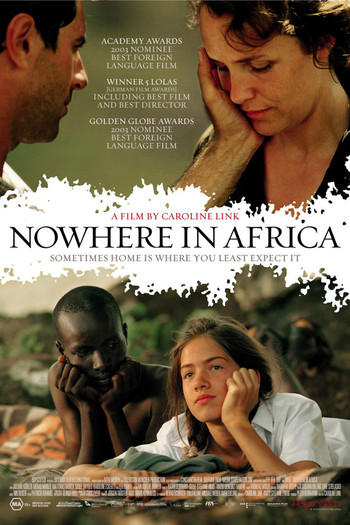 Nowhere in Africa is a 2001 film from Germany directed by Caroline Link.

The film is set 1938-1947 and centers on the Redlich family, German Jews. Walter and Jettel Redlich and their daughter Regina flee Nazi Germany in the nick of time, just a few months before the Kristallnacht pogrom. They have escaped Germany with their lives, landing in Africa in the British colony of Kenya, but matters remain difficult. Formerly members of the upper class, they are now living a hardscrabble existence in a farmhouse without electricity or running water, as Walter struggles to make it as an employee of a British colonialist rancher. Jettel is unhappy on the African savanna, missing the good life back in Silesia. And both of them miss their family members, Jews left behind in Hitler's Germany. While little Regina takes to life in Africa with ease, Walter and Jettel's marriage begins to fray.

Based on an "autobiographical novel" by Stefanie Zweig, a German Jew who fled to Kenya as a child with her parents in 1938.