Film / Son of the Bride 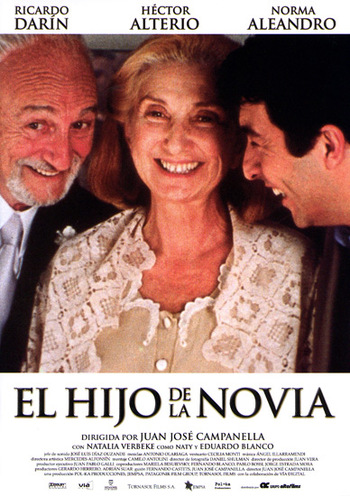 Son of the Bride is a 2001 film from Argentina directed by Juan Jose Campanella.

Rafael is a 42-year-old man going through a mid-life crisis. One might wonder why the heck he's having a crisis, since he's a successful restaurateur with a ridiculously sexy, fun, mid-20s girlfriend named Nati. But the restaurant game is a high-stress business that ruined his marriage (he's three years divorced from ex-wife Sandra) and leaves him little time to spend with their daughter Vicki, who is about ten. Far worse, his mother Norma is in an old folks' home with advanced Alzheimer's disease. Rafael hasn't gone to see her in a year, something he feels very guilty about.

Rafael is stressed out by declining profit margins at his restaurant, and is grudgingly considering selling it to a corporation. He's thrown a curveball when his father Nino tells him that he wants to give Norma the church wedding she always wanted, and wants Rafael to help him pay for it—an idea that Rafael doesn't support, given Norma's mental decline. Stress and guilt lead to Rafael suffering a heart attack. He survives, but the brush with death leads him to a decision: he will "drop the fuck out" and leave the rat race behind.