Involuntary Battle to the Death 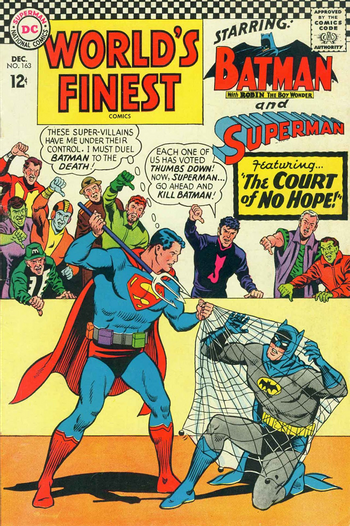 Melllvar: To prove who is more worthy of my fanatical devotion, I shall pit you against each other in armed combat... to the death!
Bender: Where did you get an idiotic idea like that?
Melllvar: Episodes 19, 46, 56, and 77. note Melllvar is using the production order, rather than airing order
Fry: Great list. Except, you forgot episode 66! Ha ha ha ha ha!
— Futurama, "Where No Fan Has Gone Before"
Advertisement:

Two parties are placed in a situation where one of them has to kill the other, usually in a contest of some kind. If they refuse or come to a stalemate, both die. Almost always initiated by a third party, usually a sadistic bastard. The catch is that neither side wants to kill the other, sometimes creating a "take me instead" type situation. Most of the time the contest is stopped when a fourth party or the participants Take a Third Option.

Note that for a situation to be an example of this trope, the participants have to be people who would not kill each other in a normal situation. So Combat by Champion would not count unless the champions were actually best friends and were unable to back down.

Closely related to the Sadistic Choice and often used in conjunction with Villain: Exit, Stage Left. Sometimes occurs in There Can Be Only One plots. Compare Duel to the Death.