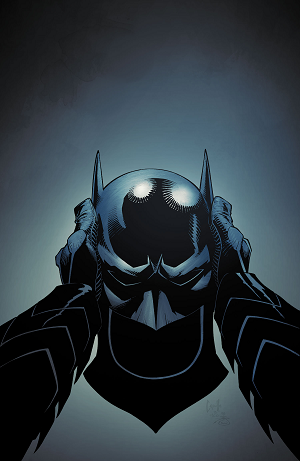 Batman: Zero Year is a major comic book storyline set in the DC Universe, spinning out of Scott Snyder and Greg Capullo's relaunched Batman title. It is a reimagining of Batman's origin story, explaining how Bruce Wayne donned the cape and cowl for the first time and how the Dark Knight became Gotham City's greatest protector in the New 52 continuity.
Advertisement:

Consisting of three acts (Secret City, Dark City and Savage City), it depicts Bruce Wayne's return to Gotham City after years of absence and his first attempts at crimefighting, as the city nears the brink of destruction during a catastrophe: as a terrifying superstorm comes raging, the city's first supervillain — The Riddler — shuts down all electric power and leaves the citizens to face the storm in the dark while he enacts a mysterious plan. Amidst the panic and chaos, the legend of Batman begins.

The year-long arc lasted from June 2013 to July 2014 in the Batman title, with a prologue in the form of September 2012's #0 issue. During the second act of Zero Year, many other titles had their 25th issue as a tie-in depicting their (at the time non-superhero or villain) characters during the storm and blackout in Gotham: Action Comics (focusing on an early, cocky Superman), Batgirl, Batwing, Batwoman, Birds of Prey, Catwoman, Detective Comics (focusing on Gordon and the GCPD), The Flash, Green Arrow, Green Lantern Corps (focusing on John Stewart as a marine), Nightwing, and Red Hood and the Outlaws.

Certain aspects of the storyline serve as one of the inspirations for the film The Batman, namely with the Riddler being the villain.