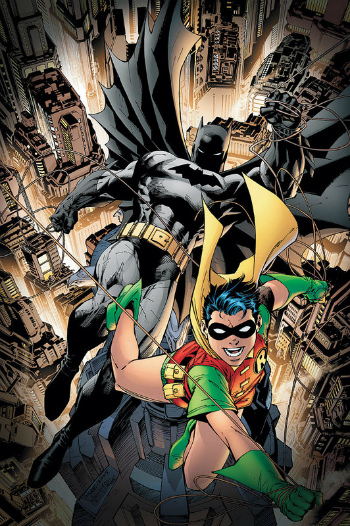 The original All-Star DC Comics title. Ran from 2005 until 2008. When DC announced the book it was widely anticipated as Frank Miller's return to the site of two of his greatest books — Batman: The Dark Knight Returns and Batman: Year One — with a story illustrated by Jim Lee. The story that came out certainly became popular, but not for any of the reasons that the publisher could have anticipated.

Frank Miller has described the story as a distant prequel to The Dark Knight Returns, showcasing how Batman met and recruited Robin in his war against crime. Along the way, Batman meets a number of the other heroes of the DC Universe, who are left at a loss for words at his radical approach to stopping crime.

The series was infamous for, among other things, having an erratic release schedule. After the run came to an endnote As in no new issues were published, not that the story itself had been completed, it was announced in 2010 that Frank Miller would write a Continuity Reboot called Dark Knight: Boy Wonder that would go on for 6 issues and compile the story that he wanted to tell originally. More than a decade later, there's still no word on when exactly this series will arrive.

, which Snyder heavily emphasizes has nothing to do with this.

This goddamn comic provides examples of: