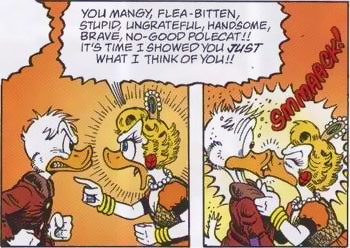 [punches Hiccup on the arm]
"That was for kidnapping me."
[kisses him on the cheek]
"That was for everything else."
— Astrid, How to Train Your Dragon
Advertisement:

This trope is nothing but universal in romantic stories. It frequently brings to a close the Will They or Won't They? phase of a Romance Arc.

When a male and female character spend a lot of time bickering, it is all but inevitable that sooner or later he will interrupt her in mid-rant by suddenly grabbing her and kissing her. (Less frequently, she grabs and kisses him.) The kissed one rarely resists, and usually responds wholeheartedly.

Usually this is triggered by their hostilities reaching a climax that results in an exchange of slaps, followed by a moment where both stare at each other in combined confusion and shock, after which they dive into the kiss.

Either way, the kiss prompts both to realize that they've been in love all this time — the rationale being that they wouldn't argue so much if they didn't give a damn about each other. Normally results in some kind of permanent change in their relationship.

The concept is related to the theory that hate is not necessarily the opposite of love so much as its twisted twin; its opposite would be apathy. Ergo, lots of contained emotion towards a person might be translated into lust given the proper catalyst. Pulled off successfully, it can be... quite satisfying. Otherwise, not so much.

This trope is a major factor in Foe Yay Shipping since such arguments between those characters in the actual shows are often similar to examples of this trope (or even get Why Don't You Marry It? reactions). It should be noted that in Real Life it's not exactly a sign of a healthy relationship, with the exception of a little roleplay between consenting adults.

Note that this trope is mostly Exactly What It Says on the Tin. If there is no kiss, that's Belligerent Sexual Tension.

Dating back at least to William Shakespeare's Much Ado About Nothing.

Kiss-Kiss-Slap is this in reverse (kissing, then fighting). These two tropes can easily be Zig-Zagged (so easily that the trope images of these two tropes share a frame from the exact same story).

Underneath their mutual antagonism Nicholas and Mia are actually attracted to each other.

Underneath their mutual antagonism Nicholas and Mia are actually attracted to each other.