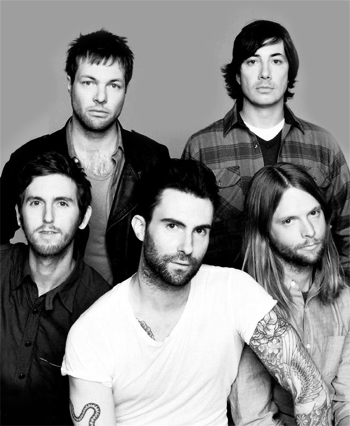 This love has taken its toll on me
She said goodbye too many times before
And her heart is breaking in front of me
I have no choice cause I won't say goodbye anymore
— "This Love"
Advertisement:

Maroon 5 is an American band from Los Angeles. Originally forming as Kara's Flowers in high school by lead vocalist and guitarist Adam Levine, keyboardist Jesse Carmichael, bass guitarist Mickey Madden, and drummer Ryan Dusick, the band released one album on Reprise Records under the moniker in 1997. Upon the arrival of guitarist James Valentine, the band rebranded themselves as Maroon 5.

In 2002, they released their debut album, Songs About Jane. However, it wasn't until a year later, when their breakout single "This Love" was released, that they were put on the map. The album went on to contain other hit singles like "Harder to Breathe", "She Will Be Loved" and "Sunday Morning". Songs About Jane enjoyed major chart success, going gold, platinum, and triple platinum in many countries around the world.

In support of Songs About Jane, Maroon 5 toured extensively throughout 2003–05, and released two live albums during that period. After the band won the Grammy Award for Best New Artist in 2005, Ryan Dusick left in September 2006, citing injuries sustained by constant touring; he was replaced by their current drummer, Matt Flynn.

After a five-year gap, Maroon 5's second studio album, It Won't Be Soon Before Long, was released in May 2007. Its lead single "Makes Me Wonder" become the band's first number-one single in America, and subsequent singles "Wake Up Call" and "Won't Go Home Without You" were released to decent success. Additionally, a compilation of previously unreleased songs, The B-Side Collection, and a remix album, Call and Response, were also released shortly after.

Their third studio album Hands All Over was released in September 2010, launched by the hit single "Misery". In 2011, Adam Levine was named a coach on the American version of The Voice. Capitalizing on the show's surprise success, Maroon 5 recorded the duet "Moves Like Jagger" with Adam's fellow Voice coach Christina Aguilera; the song became their second #1 single in their home country, and topped the chart for four non-consecutive weeks, becoming their biggest hit yet. Levine also emerged the winning coach of The Voice's first, fifth and ninth seasonsnote with Javier Colon, Tessanne Chin and Jordan Smith respectively, and ended up having the second-longest run of any Voice coach at 16 seasons, beat out only by Blake Shelton, who has been a coach in every season and formed a famous "frenemy/bromance" dynamic with Levine during his time on the show.

The albums that the band released during the rest of the 2010s into the 2020s (Overexposed, V, Red Pill Blues, JORDI) signified a gradual stylistic shift away from the band's rock roots, leaning into R&B and pop with more electronic production and focusing heavily on other producers and writers. While this has come at the cost of increasingly mixed reception from critics and listeners alike, it has produced some of the band's biggest commercial success and most popular singles (including "Payphone", "Maps", "Animals", "Don't Wanna Know" and "Girls Like You").

Since debuting in 2002, the band has sold over 120 million records.

She said "goodbye" too many times before