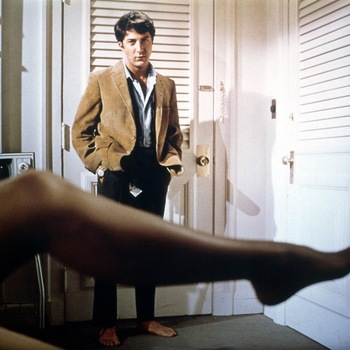 This classic 1967 dramedy film, directed by Mike Nichols and adapted from Charles Webb's novel of the same name, is famous for being the first "serious" movie specifically targeted at the Baby Boomer generation, for prominently featuring Simon & Garfunkel music (most memorably an early version of the toe-tapper "Mrs. Robinson"), and for skyrocketing Dustin Hoffman to fame. It also contains many extremely memorable and oft-parodied lines (particularly, "Mrs. Robinson, you're trying to seduce me") and scenes (such as the climax where Ben rescues Elaine from her wedding).

Disaffected college graduate Benjamin Braddock (Hoffman), having no idea what to do with his life and receiving no guidance from his shallow parents or their shallow friends, passes his days drifting aimlessly. He begins a clandestine affair with the wife (Anne Bancroft) of his father's business partner, who is always "Mrs. Robinson" to him. However, his parents have plans to match him up with Mrs. Robinson's daughter, Elaine (Katharine Ross). Ben and Mrs. Robinson both detest the idea for different reasons, and he has every intention of making Elaine hate him as much as possible... until the two hit it off.

Also in the cast are William Daniels and Elizabeth Wilson as Ben's parents and Murray Hamilton as the unsuspecting Mr. Robinson. Richard Dreyfuss briefly appears in one of his first film roles; he has one line.

The novel has a sequel, Home School, published 40 years after the release of the movie due to copyright issues.