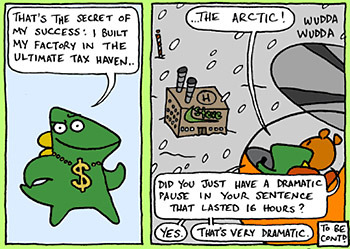 The characters will be in a conversation when suddenly the scene changes to another location entirely... but the conversation continues as if no time has passed at all, despite how far away the new location was from the original one. Sometimes this will be avoided by a "I still don't get...", to make it seem like the characters have been talking all along, but usually they just scene transition and keep talking.

Subtrope of Time Skip. Related to Traveling at the Speed of Plot. The supertrope of Gilligan Cut and "I Know What We Can Do" Cut.

Hopefully she didn't hold a dramatic pause for at least 20 minutes!

Hopefully she didn't hold a dramatic pause for at least 20 minutes!