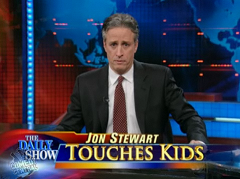 We've all been touched by Jon. These kids should be happy they were exposed to him early.
Ross: How would [your son] like to come with me to the Museum of Natural History after everyone else has left, just the two of us, and he can touch anything he wants?
Mr. Zelner: [looks horrified]
Ross: I just heard it as you must have heard it and that's not good. Let me start again. I'm a paleontologist, you'll be there with us and the touching refers only to bones... fossils!
— Friends, "The One Where Estelle Dies"
Advertisement:

It seems that, when comedy is concerned, sexual attraction to children is as good a source of laughs as anything else, especially when the person being persecuted is innocent (of that particular crime).

It usually goes like this: A small child grabs the MacGuffin the main characters are trying to fetch, or is otherwise important to the plot in some way — they might be children of the boss to whom they have to suck up, or even a MacGuffin themselves. As the main characters approach the child, unaware of how to behave and how to act, it seems to onlookers (and to the viewer, if they weren't in on the plot) that the interest in the kid is of a sexual nature.

The kid might scream, or parents/nannies might overlook the conversation and come to the wrong conclusion, but it usually ends with several parents chasing the would-be-creep with peppersprays, purses filled with bricks and TASER guns. If he's a villain, we laugh. If he's an Unsympathetic Comedy Protagonist, we also laugh. If he's an actual paedophile, the trope doesn't really apply.

Surprisingly, what never happens is any serious involvement of the police (it seems that overzealous parents are more than sure of their own creep-chasing abilities) or some sort of clarification that the character in question is not attracted to children. Guess they'll have to live with being mistaken for paedophiles all their lives.

The perpetrator is almost Always Male because of the Double Standard that men are always after sex while women never are. Conversely, a woman Friend to All Children can do things that would easily get a man lynched, and would just be dismissed as playing around or being nice, due to a woman's supposed lack of perverse desires.

It seems like the jig is up for Dewey, but when he tries to explain what he's been teaching to the kids, he uses a poor choice of words. Combined with "Mistaken For Pedophile"

It seems like the jig is up for Dewey, but when he tries to explain what he's been teaching to the kids, he uses a poor choice of words. Combined with "Mistaken For Pedophile"