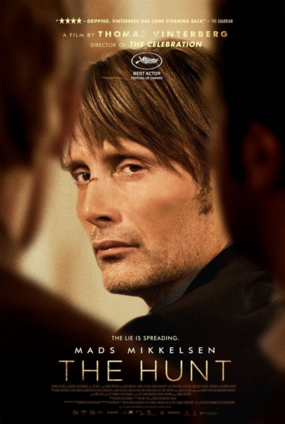 Yes, this is the good guy. Don't let his cheekbones trick you.
Lucas: You and I have to bring everything into the open.
Theo: Lucas, I know her. Why would she lie?
Advertisement:

The Hunt (Jagten) is a 2012 Danish drama directed by Thomas Vinterberg. It's a study of human nature and mass hysteria.

It is set in a small, conservative Danish community. It follows Lucas (Mads Mikkelsen), a well-liked, friendly kindergarten teacher and divorcé whose life has begun to improve. His relationship with his estranged son has bettered, and he has found new love with a co-worker named Nadja. He has his mates to support him, including best friend Theo (Thomas Bolarsen).

However, Theo has a daughter named Klara who attends Lucas' kindergarten, and who rapidly develops an unhealthy obsession with Lucas. After she kisses him on the lips during school playtime, Lucas is quick to rebuff her infatuation. In a childish rage, she unwittingly implies to the head teacher, Grethe, that Lucas has sexually abused her.

The lie begins to mutate and grow, with Klara's account quickly spread by gossip. Through paranoia and the fact that kids often repeat what they hear, some of the other children report signs of abuse. Soon enough, the village turns on him, including the vast majority of his friends and co-workers. Because it's Lucas' word against Klara, and the adults believe that there's no way Klara would lie, he is quickly ostracised from the community. The only allies Lucas has are his son, Marcus (Lasse Fogelstrom), and a few friends.