Manga / The World is Still Beautiful 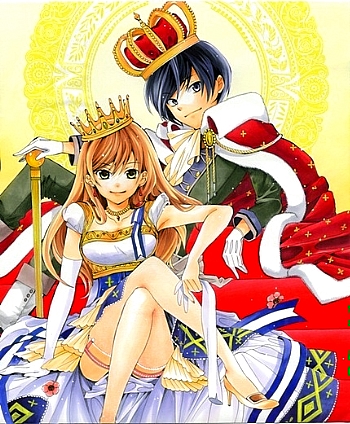 The King of the Sun, and the Princess of the Rain
Oh clouds, come upon us.
Oh rain, descend upon us.
Chase away the flames
and convey unto our thirsty King
that the world is still beautiful.
— Song of the Sun King
Advertisement:

The Dukedom of Rain is a small country located far north of the mainland. While poor compared to the countries located on the continent, the country is peaceful, and its ruling family is much beloved by its people. It's a far cry from the turbulent times that the continent had endured over the past few years, before it was finally united under the rule of the Sun Kingdom's monarch, the eponymous Sun King.

The latter soon approaches the Rain Dukedom's sovereign, and much to everyone's surprise, decides not to conquer it and add it to the Sun Kingdom's holdings. However, in exchange for the Rain Dukedom's autonomy, they have to agree to a small deal: to send one of the princesses of the Dukedom's ruling family to become the Sun King's wife. This is because the Sun King had heard of the special talent of the dukedom's royalty, and wanted to witness this miracle himself. For you see, much like the name of their country, its royalty had the ability to call down the rain.

Nike is the fourth princess and, after a spirited match of rock-paper-scissors with her older sisters, was the one "volunteered" to be the wife of the Sun King. She's clearly not happy about being given this responsibility, but she goes out of duty anyway. When she arrives in the Sun Kingdom however, and meets her future husband, King Livius, she quickly realizes that things are definitely not going to be easy.

The Japanese title, Soredemo Sekai Wa Utsukushii (それでも世界は美しい), literally translates as "Even So, The World is Beautiful", and is rendered on the anime's logo as "Still world is Beautiful". Officially released in English as The World is Still Beautiful, the series is a Shoujo manga by Dai Shiina, and was serialized in Hana to Yume magazine from 2012 to 2020. An anime adaptation of the first eighteen-odd chapters was produced by Studio Pierrot and aired during the Spring 2014 season.

The World is Still Beautiful includes examples of the following:

Alternative Title(s): Even So The World Is Beautiful, Soredemo Sekai Wa Utsukushii