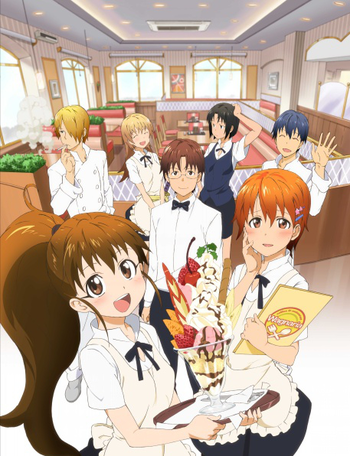 "Someone, one one! Someone else!"
Advertisement:

Wagnaria!! (AKA Working!! in Japan) is a comedy / slice-of-life / romance Yonkoma by Karino Takatsu. The manga was published in Square Enix's Young Gangan magazine from 2005 to 2014.

Compare to Servant × Service, another Work Com by Karino Takatsu, this time focusing on the misadventures of a group of government employees. Not to be confused with Working, the '90s Work Com starring Fred Savage of Wonder Years fame, or with the musical Working by Stephen Schwartz, the songwriter for Wicked. The name change to Wagnaria for the English-speaking audience was probably to prevent confusion to these works.