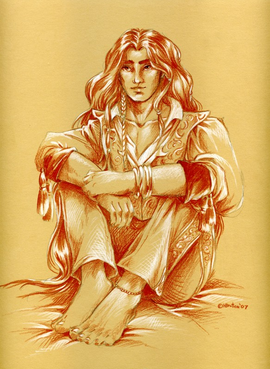 Fanart of Jerin by Hbruton

. The actual cover of the novel shows Jerin with short-ish hair.
Advertisement:

A Brother's Price is an Low Fantasy novel by Wen Spencer.

Jerin Whistler is a simple subject of Queensland where more than ninety percent of the population is female. Understandably in such a society men are a rare and valuable commodity to be bought, bargained and bartered for by families that want him to marry all the women note —to be more precise, all sisters— in that family.

Then his young sister, out of 27 such siblings, drives off a group of attackers targeting a lone rider. His family has kept up the soldier skills that made them landed gentry. They retrieve the woman only to find themselves caught up in a plot that involves their family history, treason and the fate of the entire nation - which could all hinge on his brother's price.

This book is partly speculative fiction, partly something of a Romance Novel, in which gender roles are largely reversed. As a large portion of the plot is dedicated to who marries whom, it is somewhat similar to Jane Austen's works, while the setting is more like The Wild West, only with a monarchy and Girls with Guns.

An excerpt is found here

open/close all folders
A-B
C-D
E-G
Advertisement:
H-K
L-R
S-T
U-Z
&&* Wounded Hero, Weaker Helper: After Princess Odelia is hit over the head by bandits and left to die in a creek. She is found by a child, Heria, and is carried to safety by Heria's older brother Jerin, who, while not exactly weak is arguably somewhat less badass than Odelia and her sisters. She does not get to have a Rescue Romance due to being unconscious most of the time. Her sister Ren, however, takes advantage of the situation.