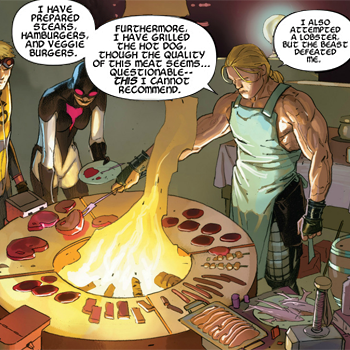 Thor, God of Thunder, Chef of Iron.
Nothing is more old-school than baking your own damn staff of life! A dude who can walk into any kitchen in the world and make bread is COMPLETELY RAW!
— Ray Smuckles, Achewood
Advertisement:

Everybody has to eat, which means, oftentimes, somebody has to cook. While it is often the job of the lady of the house to prepare delicious meals (or to at least try to), you can also count on seeing the men taking care of this. Expect him to be flipping burgers or steaks on a grill, preparing food on the trail for the rest of the team, or preparing a meal to impress a female companion.

By contrast, a man who can't or doesn't cook, for whatever reason, might face some degree of mockery or lampshading over it. If a male character is shown to live on a diet of ramen, microwaved meals, and delivery food, it can be a sign of immaturity (when it isn't simply financial problems).

Obviously, depends greatly on the cultural background of the characters (and the creator of the work itself). Also, the style of cooking may affect the relative manliness of the act, with grilling being a favorite as Fire Is Masculine. For obvious reasons, this is pretty much a given in settings where there are few or no women around. Otherwise the men might starve.

See also Chef of Iron, where the cook is the biggest badass around. A Super-Trope to Camp Cook. Compare to Manly Men Can Hunt. Contrast with Feminine Women Can Cook and Stay in the Kitchen. Also contrast Dads Can't Cook, though whether dads are real men depends on the story.