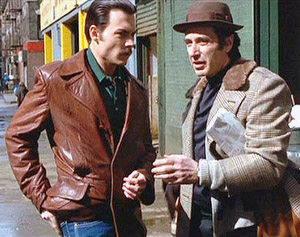 Donnie Brasco is a 1997 crime drama staring Al Pacino (Lefty), and Johnny Depp (Donnie) set in the Mafia gangland of 1970s-80s New York. An imposing mafia hitman, one Benjamin "Lefty" Ruggiero needs some advice on a jewel he has been given as collateral. Nothing here is as it seems: the jewel is a fake and the guy giving him advice, expert jewel thief Donnie Brasco, is in truth working deep cover for the FBI.

The rich detail originates in the extraordinary real-life story the film depicts, with first-hand help from the real "Donnie Brasco" note and his book Donnie Brasco: My Undercover Life in the Mafia. It is a Dramatization, not a Documentary — the film shuffles and condenses who did what to whom.

Things aren't going well on the home front for either Donnie or Lefty. Lefty has cancer. His son is a junkie. He's forever being passed over for promotion — after thirty years he has no respect.

Donnie is a brilliant undercover agent. A natural actor and a subtle, skilled manipulator. But being undercover means long absences from his family and when he is home, he's not the man he used to be. His wife and kids are extremely unhappy with him. His FBI bosses want to use him for their own ends, not always careful or even interested in his safety. He's getting more from his relationships mob side, particularly with Lefty.

There is a big problem with being a crook: you work with crooks. The situation heats up. Both men have to make some painful choices. For Donnie, it especially applies considering that when the FBI finally makes their move on the mob Donnie has infiltrated, Lefty will pay the price for allowing Donnie to do that.

Despite this set-up, the film doesn't choke on unleavened drama. There is a lion's share of offbeat comedy. Pacino and Depp are obviously having a great time with all the snappy back-and-forth. And most notably, Donnie Brasco is directly responsible for codifying one major element of pop culture's Mafia stereotype: the idea that mobsters love to say "Fuhgeddaboudit!"—all the time...in various contexts...with various meanings.

Michael Madsen plays Sonny, the boss of Lefty's crew. Bruno Kirby plays Nicky, another member of the crew. Paul Giamatti shows up briefly as an FBI tech. A young Gretchen Mol has a bit part as Sonny's girlfriend.