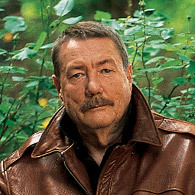 Leather Jacket Optional
Robert B. Parker (17 September 1932 – 18 January 2010) was an American author; mostly of Mystery Fiction and Police Procedural works, although he also dabbled in romance, westerns and young adult fiction. He is best known for his long running Spenser series, about the eponymous Boston-based Private Detective, as well as the Jesse Stone and Sunny Randall books. He also finished Raymond Chandler's unfinished Philip Marlowe novel (and wrote another original one); after Parker's death, the favor was returned, with several authors continuing some of his active series. Many of his peers regarded him as one of the most influential and respected voices in crime fiction, often placing him in the same class as Raymond Chandler and Dashiell Hammett.
Advertisement:
Works by Robert B. Parker
Works by other authors featuring Parker’s characters

Tropes Pertaining to the Author: