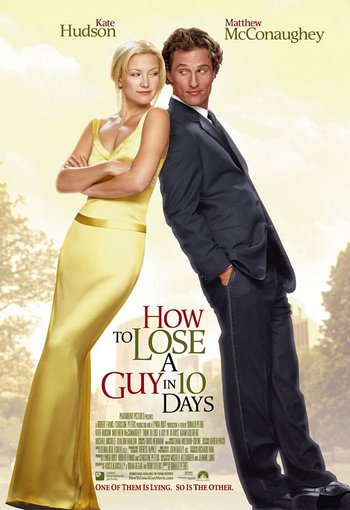 Based on a short cartoon book of the same name by Michele Alexander and Jeannie Long, this light Romantic Comedy film was directed by Donald Petrie (of other chick flicks such as Miss Congeniality, and Mystic Pizza), won the 2003 BMI Film Music Award, and was nominated for several categories by the MTV Movie and Teen Choice Awards.

Benjamin Barry (Matthew McConaughey) is an advertising executive and ladies' man who, to win a big campaign by a diamond syndicate, bets that he can make a woman fall in love with him in 10 days. Andie Anderson (Kate Hudson) covers the "How To" beat for Composure magazine and is assigned to write an article on "How to Lose a Guy in 10 Days." They meet in a bar shortly after the bet is made and Hilarity Ensues.

Alternative Title(s): How To Lose A Guy In Ten Days