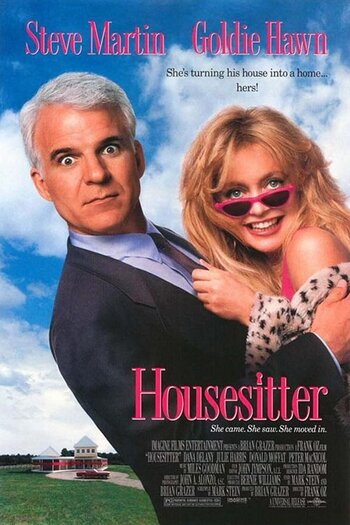 Newton Davis (Martin) is a struggling architect who tried to propose to his long-time love Becky (Dana Delany) with a fully-built house in their hometown, only for her to refuse. Unable to fully move on, Newton keeps the house and leaves it empty.

Months later, during a dinner party for his business, he befriends a waitress that had originally tried to avoid socializing with anyone by pretending to not know any English. After spending a night together, the waitress, Gwen (Hawn), decides to move into the abandoned house Newton had mentioned during their time together. Without money to buy furnishings or food, she convinces the town that she's Newton's new wife, and to put things on his tab. What originally starts as the perfect scheme quickly goes south when Newton decides to finally sell the house and learns of Gwen's antics...and then becomes complicated when Newton agrees to maintain the lie, because it's making Becky reconsider her feelings for him.