Race for Your Love 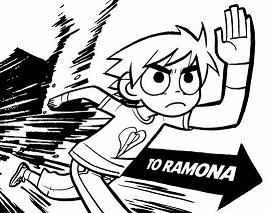 To the Scott-mobile!
"Well, if Hollywood movies have taught us anything, it's that troubled relationships can be completely patched up by a mad dash to the airport!"
— Lisa Simpson, The Simpsons
Advertisement:

Most commonly found in Romantic Comedies, Race For Your Love usually occurs five minutes or so before the credits roll.

Alice and Bob have become involved. There's chemistry. Sparks. But, for whatever reason, Alice has turned her back on this budding romance. Sometimes it's because she's convinced "we're too different" or "we come from different worlds" or some other rationalization that it'll never work out. Sometimes there's another person in the picture, and Alice feels honor bound to go through with the lesser romance.

Bob, also being honorable, straightens his shoulders and prepares to deal with losing Alice to the circumstances or bad luck leading to this situation. But because it's too painful for one or both of them for him to stay around and remind them both of what might have been, he must leave. Fortunately, there's usually some job opportunity in another city, or he was only visiting this one temporarily anyway.

Then Alice suddenly has an epiphany: she really does love Bob too much to not be with him! She loves him more than Steve, who she was going to marry instead. She loves him more than her job, or whatever other situation had cropped up that made her think she had to choose it over Bob. But ...he's about to leave because she shot him down! If she doesn't turn around and get back to him right this minute he'll be gone, she'll have missed her chance, and she'll have what might have been haunting her forever.

So, newly inspired, Alice hops into a cab or some other mode of transportation to get her back to Bob's arms as quickly as possible.

But as Drama would have it, the road back to romantic bliss is full of obstacles. There's bad weather or bad traffic or some other impediment that makes it impossible for her to get all the way there in one smooth cab ride. But Alice is determined. She will, she must get to the train or plane or other conveyance that's about to take Bob out of her life forever, before it's too late!

So she gets out and runs, because love compels her to.

Occasionally there's a twist where she gets there, all out of breath and ready to confess how she feels — but he's already gone, his plane already taken off. Or is he? He's standing right behind her, because he couldn't leave. Or because he hoped or knew she'd come around. Or maybe just because he got stuck in traffic and missed his flight.

A low-impact way to Earn Your Happy Ending. If the race is really lost, may result in Air Voyance. A subtrope of Grand Romantic Gesture. Compare the Big Heroic Run, where there is usually much more than just a relationship at stake.

Needless to say, due to the nature of this trope, spoilers below.