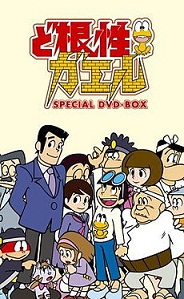 A boy, his frog, and lotsa other characters
Advertisement:

Dokonjō Gaeru (ど根性ガエル lit. Gutsy Frog) is a Shōnen manga and anime from The '70s, created by Yasumi Yoshizawa. The manga was serialized in Weekly Shonen Jump from 1970 to 1976, then had two anime TV series (in 1972-1974 and 1981-1982), followed by a live-action TV series in 2015. It has reached cult status in Latin America and especially in Chile. Although the series has aired on Japanese-language television in the United States, it has never been dubbed or subtitled in English (until in February 2018 by the fansubbing group GutsySubs

), although an American live-action TV movie adaptation was rumored to be in development at one time.

This is the story of a middle school boy named Hiroshi and Pyonkichi, a rather special talking frog. One day, Pyonkichi is jumping around and minding his own business, and then Hiroshi crashes on him. Somehow, Pyonkichi survives... as his soul sorta becomes an imprint on Hiroshi's shirt. Since Hiroshi is very poor and that's his only good shirt, he's forced to keep it as well as Pyonkichi, who becomes a sort-of member of his family and his best friend...

Yep, this is one really weird show.