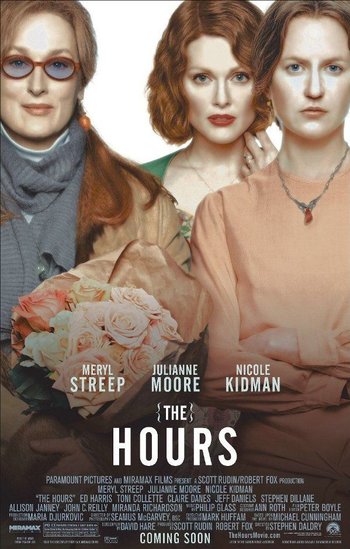 Kitty: Oh. You're reading a book.
Laura Brown: Yeah.
Kitty: What's this one about?
Laura Brown: Oh, it's about this woman who's incredibly — well, she's a hostess and she's incredibly confident, and she's going to give a party. And, maybe because she's confident, everyone thinks she's fine... but she isn't.
Advertisement:

A 1998 novel by Michael Cunningham, The Hours won the Pulitzer Prize the following year and was made into a film in 2002. The film version, directed by Stephen Daldry, starred Nicole Kidman in an Academy Award-winning role, and also featured Meryl Streep, Julianne Moore and Ed Harris in the cast.

Although they are nearly eighty years apart, three different women are connected to each other by the Virginia Woolf classic Mrs. Dalloway. In 1923, the author herself battles depression and her inner demons just as she begins to write her novel. In 1949, housewife Laura Brown finds comfort in her everyday life through the same novel. In 1999 (2001 in the film), Clarissa Vaughn embodies Mrs. Dalloway herself as she prepares a party for her friend Richard, a poet dying of AIDS.

Not to be confused with the talk show The Hour (CBC), or the BBC drama series of the same name.

This novel and film feature examples of: