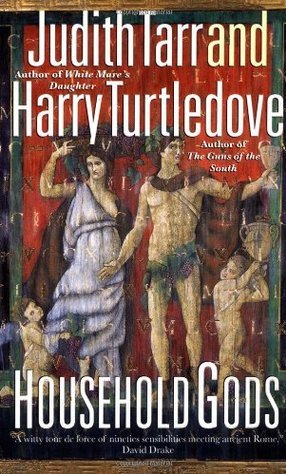 Household Gods is a 1999 book by Harry Turtledove and Judith Tarr in which a late 20th century American woman finds herself transported back into the 2nd century Roman Empire due to an ill-advised wish.
Advertisement:

Nicole Gunther-Perrin is a young lawyer in Los Angeles, California, USA. She's proud of her skills, but beaten down by her wearying existence trying to climb in the legal profession while also juggling taking care of her two children. Nicole's struggling to break through the firm's glass ceiling where she works, and pry child support payments from her ex-husband (who's traded up for a younger woman, much to Nicole's annoyance). When especially frustrated, she wishes for a life in ancient Rome to her statues of the Roman gods Liber and Libera, giving them a wine offering but naturally not expecting anything. The next day though Nicole wakes up in the body of female Roman tavern keeper Umma, living in the city Carnantum on the Imperial frontier (now modern Vienna, Austria). Abruptly stuck in an alien past, Nicole is forced to live out this new life and hope for some way of getting home.