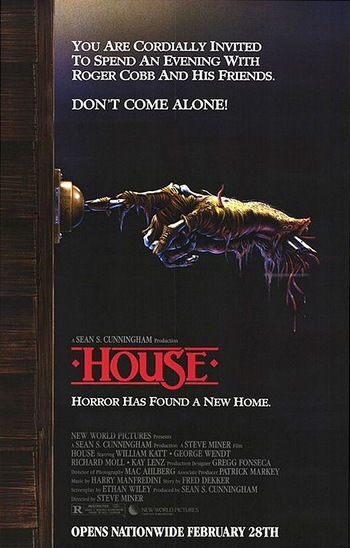 Horror novelist writer Roger Cobb's life is a mess. His son Jimmy has vanished, his actress wife Sandy has divorced him, his aunt and adoptive mother has seemingly just committed suicide, he's suffering writer's block, and has a case of post-traumatic stress disorder thanks to his tenure in The Vietnam War. On top of everything, he's decided to stay at his aunt's inherited house, where his son vanished and that he believes is haunted by malevolent forces. Believing that the house is responsible for all his troubles, Roger moves in, intending to find the truth behind it. As he unravels the mystery, he has to contend with inter-dimensional forces of darkness and his wacky neighbors.

The film had three sequels: House II: The Second Story, which was a Time Travel comedy with a different cast and setting; House III: The Horror Show, which was a totally unrelated film that was a sequel In Name Only; and House IV, which is the only sequel to be a direct follow-up to the first film.

Not to be confused with the 1977 Japanese surrealist horror comedy Hausu, the medical drama House, the survival horror adventure House (2020) or the 2017 comedy The House.