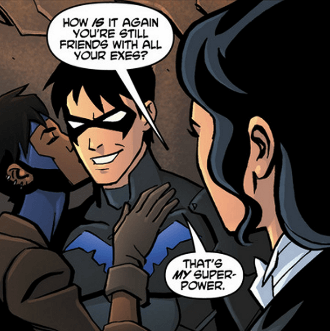 Dick joke!
"It's things like using force together,
Shouting till you're hoarse together,
Getting a divorce together,
That make perfect relationships."
— Company (Sondheim), "The Little Things You Do Together"
Advertisement:

So, people who break up must indefinitely hate each other, right?

Increasingly common in media are situations where a divorced couple still get along for the most part, and in many cases still care about each other even though they're no longer together. In many cases the divorce happened because of distance, circumstance or the simple fact that people change rather than infidelity, betrayal or other serious problems, and the fact that they got divorced is treated as a fact of life rather than due to a flaw in the people. Both parties also generally agree that it was for the best for both of them. It's also pretty common for couples who broke up because of Incompatible Orientation or who were each other's Last Het Romance to end up this way.

If there are children from the marriage they are shared without much complaint, and the amicability of the parents can often be interpreted as being partly for their sake. As such, this tends to show up in children's cartoons, perhaps as an attempt to counter the stereotype of the children of divorced parents being largely unhappy. May involve a Visit by Divorced Dad that will usually go well, and for the most part, any Divorce Assets Conflicts are avoided or settled reasonably.

The increase in this trope can be attributed to the dramatic shift in divorce rates and public perception of those who have gone through divorces in the last 50 years (i.e. between the 1950s and the start of the 21st century). While divorce used to be scandalous, it's now a fairly common occurrence, and this trope reflects the view that it's just a fact of life that doesn't have to permanently poison a relationship. Sometimes it even results in Divorce Is Temporary, though this is less common in more realistic works and those aimed at children due to an unrealistic message ("wish hard enough and your parents will get back together!").

This can apply to non-divorced former couples as well, thus the name. If someone's current and former squeeze get along well with each other, it's The Missus and the Ex.