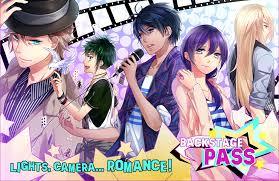 Sian Goodin has no aspirations to step in front of the crowds and the cameras - ever since her best friend Adam Eaton became a pop star overnight thanks to Youtube, she's been accompanying him as his makeup artist. However, changes are afoot for the both of them, as they are due to start their first year at Steel City University. After her father incurs a knee injury that keeps him from working for several months and her mother becomes the sole breadwinner, Sian decides to get a job to support herself. She gets contacted by director Lloyd Newton, who needs a replacement makeup artist for shooting a pilot episode of a new crime drama codenamed Cops and Robbers. Her work begins attracting attention from various sides of the entertainment industry and Sian has to juggle her studies, increasing demand for her work, as well as her relationships with her friends and colleagues, and figuring out what she actually wants to do with her life.

Backstage Pass is a Spiritual Successor to RE: Alistair, another Ren'Py-based English-language Visual Novel created by sakevisual. While it is a Romance Game with several potential love interests for Sian, the game also focuses on increasing stats in order to pass other challenges in Sian’s life throughout her freshman year, such as exams, jobs that require a high level of skill, or gaining money from blogging about makeup. There are 16 possible endings, out of which only some focus on romance – it’s entirely possible for Sian to instead form a deep, platonic friendship with a character, become famous only due to her skills, not move up in life at all… or get kicked out of college and fail miserably in her aspirations.

The game was originally released in 2014 to Steam's Early Access program, and saw its first full release on August 23, 2016. Almost all characters (except Sian herself) are fully voiced.