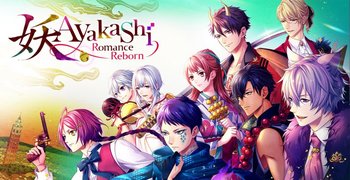 Ayakashi: Romance Reborn — also referred to as simply Ayakashi — is a Free-to-Play game that was released in English and Thai on iOS and Android platforms in the summer of 2019. The original Japanese version (Ayakashi Koimeguri) had a prior release in the fall of 2018.

Unmarked spoilers are present. You have been warned.

The game is set in a city simply referred to as 'the Capital', a city to which evil creatures known as wraiths drawn to in large numbers. The story revolves around the main character Futaba Saotome (name changeable), a girl who teams up with the Capital's local Ayakashi to both save her father and to put an end at the wraith influx. The Capital is an unusual place, with powerful Ayakashi disguised as humans, people being plagued by wraiths, and a character who may not be entirely what they seem...

The game is a hybrid of Visual Novel/Otome game and card RPG where the player controls a team of up to 5 characters, gathering materials to level the cards up as well as banishing wraiths. The further the player levels up, the more of the story gets revealed.

The main story consists of four chapters total: Prologue, Dawn, Twilight and Night. Each chapter save for the Prologue also has a second book, featuring the individual character side stories.

Tropes specific to the game itself

Tropes specific to the story