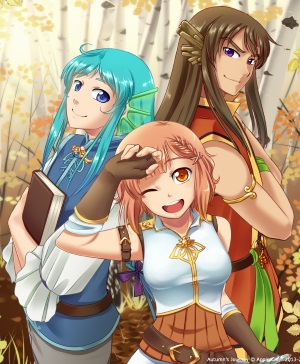 A simple VN about friendship, growth and understanding, we hope it’s as warm and comforting as apple cider.
— The official website

Auralee is a young woman who is very eager to be promoted from a knight in training to an outright knight. One day while doing a routine patrol around her small village, she comes across a strange sleeping man with weird brown shards for ears. It soon appears that this man, Kerr, is in actuality an earth dragon who was cursed into the form of a heavenkind (i.e., human) in order to force him to learn more about them. Kerr, being quite antisocial in general, is more than a little irritated by this. Soon, Auralee also comes across Ilmari, a sweet and somewhat childish water dragon who was sent down to watch over Kerr and make sure he does as told... probably.

Despite Kerr's bad attitude, Auralee's knight instincts kick in and she agrees to accompany the two of them across the land, taking on odd jobs and furthering her knight training along the way. And while she's there, she may become just a little bit closer to the dragons, too.

Autumn's Journey is an original English language otome game produced by the new amateur company Apple Cider. It is available for free on the official website