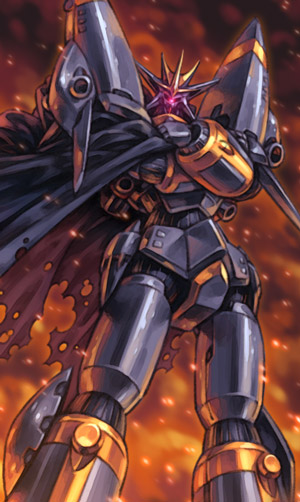 The caption text (and a bunch of space monsters) just fled in terror.
Advertisement:

One of the few ways to indicate that you are a badass or at least hellishly ambitious is to fold your arms straight in front of your opposition. When you see one doing such a pose, you know that they are badass or remarkably powerful, or so calm that they have the situation under control or at least harbor great ambition. It is also a symbol of cockiness. Bonus points if they have impressive muscles.

So basically, if you see people folding their arms, this is a good indication to see that they are badass. Even if they're not, they're still showing determination, stubbornness or toughness.

Note that crossing arms below the ribcage speaks a whole other body language, and involves bringing shoulders forward defensively. This tends to denote sulkiness or defensiveness. To cross arms over your chest, one must spread shoulders back, which juts out the chest and straightens the spine, making the figure stand slightly taller, and raises the chin. It's also "closed off" body language, indicating resistance to influence. Each of these elements alone convey confidence, the total posture sums them up to a Badass Arm-Fold. If you wanted to add, say, the Kubrick Stare you would have to consciously lower the chin, but this tends to net more badass points than it gives away.

This trope goes excellently with Multi-Armed and Dangerous, although more than six arms tends to ruin the effect.

This can be one of the Modeling Poses if the product is meant to convey strength and determination.

See also Reverse Arm-Fold and Dynamic Akimbo. Sometimes combined with Dramatic High Perching. Often leads to Rebel Relaxation, but this is when they aren't leaning. Among Anime fans, this is known as the "Gainax Pose" because so many badass Gainax characters used it (including the page image).

Naruto arrives on Konoha along side his toads to put an end to Pain's invasion.

Naruto arrives on Konoha along side his toads to put an end to Pain's invasion.