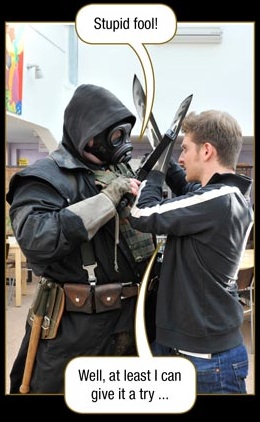 The One Who Knows: [Marc] is to help me find [the Erzengel] and to substitute him until we have so. Provided he is still up to all this - after this day?
Marc: Today I was drugged, battered and nearly killed. My mouth was magically removed and I have met an Eternal Victim, a paranoid bard and a conjuring boy who is the son of an imp. -And you still ask me a question like that? Of course I stay!
— end of episode 5

Union of Heroes (German title: Union der Helden) is a photo-webcomic authored by Arne Schulenberg, with the photos shot by Jens Sundheim. It exists as an English and a German version.

The story so far deals with Social Sciences student Marc Ridbeck, living in in the Ruhr area in Germany, who one day wakes up in an alternative universe where superheroes really exist. His counterpart in this universe is a superhero himself (called "the Erzengel"), but he has disappeared without a trace, so Marc has to take his place and become the new Erzengel. Soon Marc meets other superheroes, such as the the Eternal Victim or the Nordstadt-Barde - and of course has to fight his first villains too...

The English version of the comic can be read here.