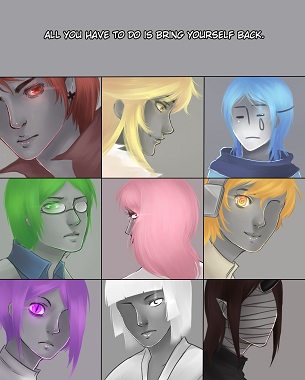 Who are these colorful guys? Emotions? Nahh.
Advertisement:

A new webcomic about a couple teenagers who are thrown into a series of parallel worlds representing 10 emotions.The ten teenagers turn out to be the "Empty Parallels" of each of the most powerful emotional parallels (Anger, sadness, happiness, fascination, love, excitement, fear, peace, and chaos).

After being forced through mirrors (the apparent transportation device to the parallel worlds) they are attacked by a few chaos parallels. By either quick thinking or computer programming, the excitable Ione pushes them through a mirror that leads them to the world of sadness.Once there, they find out about the competition between the war and chaos parallels, the ten knights that created the world, the missing emotion (the empty parallels- us), and the odd customs within each parallel world that revolve around the emotion they represent.