That Wasn't a Request 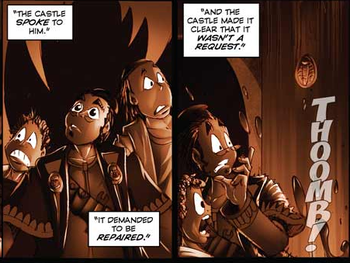 It was then that they realized just how far it was to the door...
Glimmer: Mom, we're busy.
Angella: I won't be long. You're requested for dinner with me tonight. [side-eyes Bow] Alone.
Glimmer: But Mom, I'm really tired. Can I just stay in my room and rest?
Angella: I'm sorry. I don't know why I said "request". It's not a request! You're required to have dinner with me because I'm your mother. And I'm also the Queen, so I can make you!
Bow: (Yikes, she's playing the Queen card).
— She-Ra and the Princesses of Power
Advertisement:

Usually a Stock Reply to "No!", with a hint of threatening sarcasm. A popular phrase with villains when heroes just won't cooperate. Precedes use of force to get the object of the not-a-request.

May also be worded as "That wasn't a suggestion/question" or "I wasn't asking."

Not to be confused with That's an Order!, which is said by a commander to a subordinate to show that they're pulling rank and that things are not up for discussion. "That wasn't a request" is said by people who have no official command over others but, for the moment, are ordering them around anyway; there is no reason for the person to cooperate except that the person giving the order is about to use force to back up their demand, whatever it may be. Usually said in response to Subterfuge Judo.

The Fright Knight doesn't do requests. He demands, and you'd better comply or else.

The Fright Knight doesn't do requests. He demands, and you'd better comply or else.