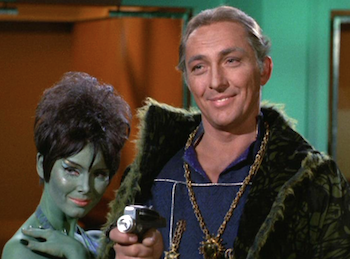 Spock and Kirk beam down to Elba II to deliver a new miracle drug to a Penal Colony in hopes of curing the patients permanently. Governor Donald Corey greets them warmly, accepts the medicine, strongly insists on them staying for dinner and visiting the poor unfortunates that they have come to cure. An Orion female (Yvonne Craig) insists that she's perfectly sane and that Corey is an imposter. Corey tuts over the poor woman's delusions and shows them the cell of the infamous Garth of Izar...only to find a severely battered Donald Corey in the cell. Suddenly, the screen goes fuzzy and "Boing!" The person they thought was Donald Corey is really the mad captain (LORD!) Garth of Izar!

Garth was once a well respected Fleet Captain, but after being badly maimed in a tragic accident he was saved and taught the art of shapeshifting by the healers of Antos IV. Perhaps due to brain damage in the wreck he decided he was through with his Starfleet career, feeling it was just grubbing away "like some ants on some...somewhat larger than usual anthill." No! He was made for bigger things! He is not a mere captain but a God-Emperor! He is the true Master of the Universe, so sit and spin, He-Man! His only mistake was overestimating the Federation's tolerance for mass genocide.

The inmates are running the asylum! The Big Bad is a shape shifter who makes Mystique look kind and reasonable in comparison! The planet's atmosphere is unbreathable! There's no escape! And Marta plagiarizes Shakespeare!