Please Spare Him, My Liege! 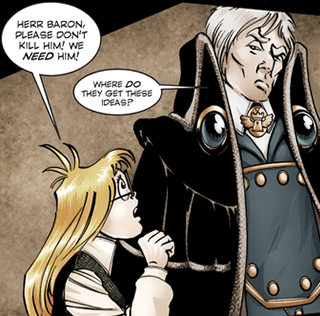 This is when you beg the monarch, or whomever is in charge, to spare the life of someone set to be executed or given A Fate Worse Than Death.

As shown in the picture, it's best done kneeling while grasping the ermine robes in a reverent manner (kissing them optional). Often it's done by insisting you know this leader is magnanimous enough to do this.

But it's usually more successful if done in the form of ego stroking ("Surely such a great king as yourself is wise enough...", "How could he possibly pose a threat to someone so great...?") or noting the good PR it will bring ("Everyone would know what a kind sovereign you are...") than by trying to appeal to any good nature ("If you just listen to your heart..."). Even if they agree, the prisoner may just be tossed into The Alcatraz instead (Iron Mask optional). A character who begs this way will be Ain't Too Proud to Beg and may promise Please, I Will Do Anything! in return.

Compare/Contrast If You Kill Him, You Will Be Just Like Him!.