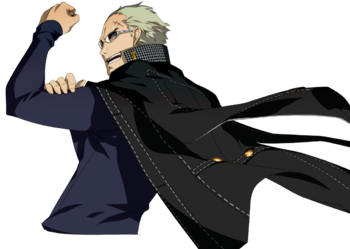 To show how cool a character is all they has to do is wear their coat like a cape, as in not bothering to put their arms through the sleeves. This is often a trait of Japanese Delinquents or military leaders.

Don't expect them to slip or fall off, even up against powerful winds, explosions and any amount of running, jumping and acrobatics, unless it's for dramatic reasons.